First times experiences in life are usually pretty memorable.  First steps, first day at school, first car, first love.  My first time at Goliath was no different – extremely memorable and for all the right reasons! 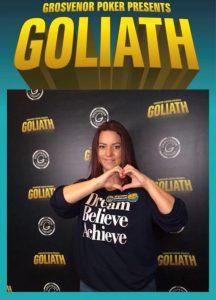 Back in 2015, I heard of “Goliath” through my parents, who had attended and loved the event the year before.  Describing it as the “British version of the WSOP”, with smiles beaming across their faces as they shared details of the event.  It was enough to sell it to me, so along with my Sister, Debbie Farbrace, we booked for the final weekend of the festival.  She was pregnant with my first nephew, so it was the perfect trip away before Motherhood commenced.

The atmosphere was like no other event.  The huge hall, thousands of players, chips clattering, music playing and everyone chatty, jovial and thoroughly enjoying themselves.  It was pure pleasure to play in such an environment.  My Mum & Dad, Sue & Kevin O’Connor, were correct – it was just like the WSOP with regards to the scale and buzz. 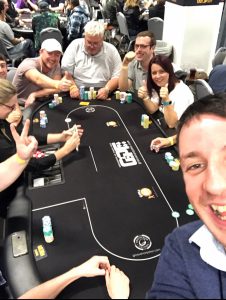 My first bullet didn’t go to plan, I busted early and I simply intended on playing a side event or some cash poker instead.  I was a recreational player and the option of having a reentry was a fairly new concept back then.  Debbie however convinced me I should try again because of the huge prizepool that had developed.  As fate had it, a guy from my local Grosvenor Casino in Thanet was there.  He already had an alternate ticket, but needed to exchange for a later one, so we swapped and off I went to play the main event again.  It was after dinner break by this time and entries had now closed, so it really was a last chance.  A total of 4210 entries were battling to beat Goliath! 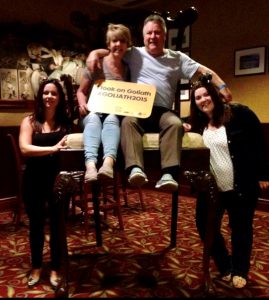 Naturally when playing poker, stacks fluctuate.  Mine was no different during this event.  Of course there were occasions when I got lucky, but I also took my fair share of bad beats and hits, as any player, in any comp does.  The key, was keeping calm, remaining patient and ignoring the massive number of players, simply focusing on those players I was directly competing against on my current table.  To this day, this calm approach and attitude has propelled me to achieve big successful results that I’m extremely proud of, both live and online. 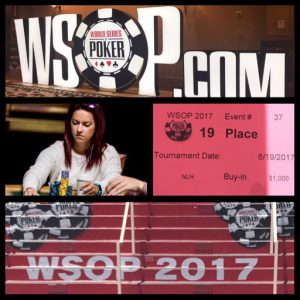 I navigated my way through the record breaking field, staying under the radar, bagging up a modest day two stack.  With the advantage of having no pressure, I excitedly sat at my day two seat and instantly started assessing my opponents.  It wasn’t long before play was underway and my table broke, as players were knocked out.  I was reassigned the very next table, that instantly broke before I could even take my seat!  Numbers were dropping drastically.  Before I knew it we were approaching the bubble, which always encourages an interesting twist in dynamics with pressure play between the short, medium and big stacks.  I was hovering around the average, so was fairly comfortable.  In the huge field, it didn’t take long until we were declared in the money and I had secured my first ever Goliath cash!

Swiftly players were eliminated after the bubble burst and before long I had successfully managed to get through to the final day, with just two tables remaining.  I had been pretty oblivious of any attention surrounding the players remaining, until that final day.  The final two tables, one of which was the live stream feature table, were positioned in the corner of the huge room and were roped off from spectators railing.  It suddenly seemed real.  Slight nerves crept in, replacing my blase excitement from the previous day.

Taking my seat at the table, I entered my zone.  Ignoring family and friends on the rail, I played my game, picking my spots, whilst being acutely aware of action and eliminations on the other table.  Then the moment came, I had made it to the final table! Being completely honest, I wasn’t completely aware of the enormity of the event, as I had missed the rest of the week, having only arrived on the Friday.  It wasn’t actually until I attended the entire festival the following year, that I realised the magnitude of what I had achieved by reaching that final table.

Being positioned to the direct left of the eventual winner, Miikka Toikka, was extremely fortunate for me.  He was (and still is) a class player and person, oozing confidence with every aggressive move he made.  It was a fairly active final table, with players making moves, sometimes recklessly given the ICM implications, a few showing clear fatigue and inexperience.  I adapted my approach to carefully target and take advantage of this to ladder my way up.  Helping me to keep fresh and alert, I interacted with my family and friends on the rail who were equally excited and encouraging me.  Eventually we were 4 handed.  I happily agreed to a no brainer deal suggested by the chip leader.  First place prize was to be reduced by £5000 and added to 4th place.  I was the shortest stack at the time, but as it happened, the chip leader who had suggested the deal, ended up busting next.

Short handed play experience shone through for Miikka, as he continually raised applying pressure to both myself and Ryan Meager.  The two guys tangoed frequently and I was able to sit back and watch the fireworks!  A massive cooler sent Ryan to the rail and left me heads up against Miikka, but with a 10:1 chip deficit!  In the blink of an eye, only a couple of hands in, Miikka was crowned Champion Goliath 2015 and I was runner up for £46,300, my biggest live result at the time and I was elated! 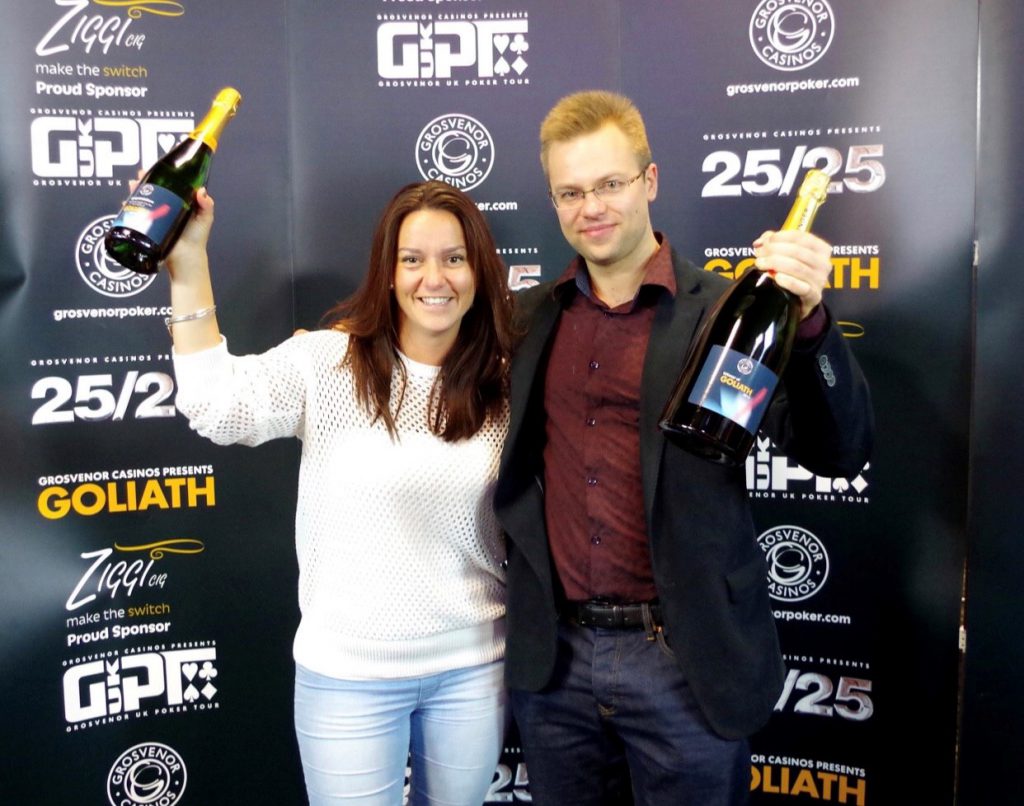 I believe it was this result that ignited my poker career, as pretty soon after I accepted an offer of a sponsorship deal with Grosvenor Poker.  It gave me the confidence in my poker game enough to devote more time to it, travelling the world playing in various comps, as well as playing more volume online too.  Goliath will therefore forever be my special comp that I thoroughly enjoy and look forward to every summer.

This year is the tenth anniversary of Goliath.  In these unique current times of the Covid-19 world pandemic, the special plans for the live event to mark the occasion have unfortunately been cancelled.  However, we’re blessed to live in a modern time of technology.  This presents us with an opportunity to experience a whole new Goliath, as it transfers online to Grosvenor Poker for the very first time!  None of us will surely ever forget this “first time”! 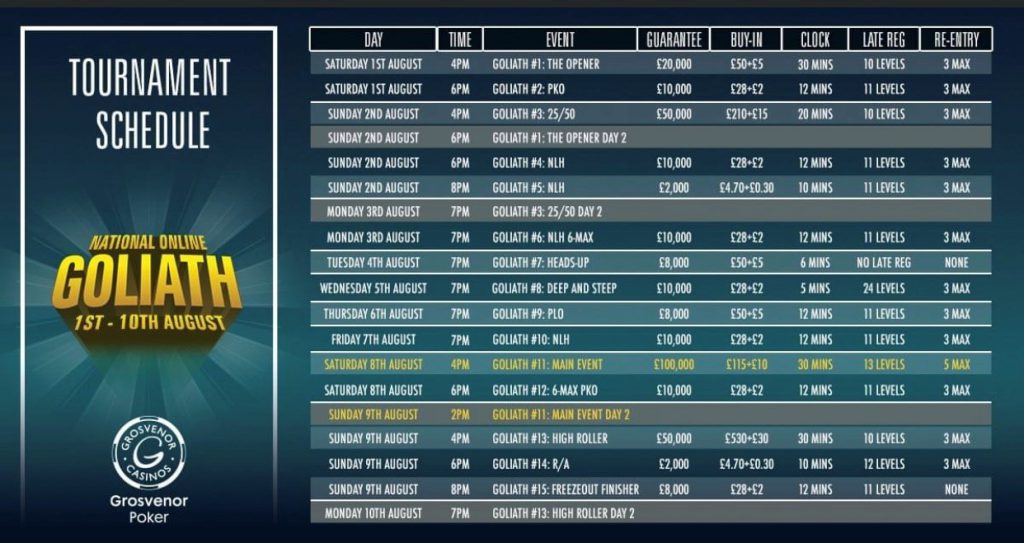 Whether it be live or online, distractions can have a negative impact on your results.  Even if you’re not involved in a hand, key information is presented constantly that you’ll be able to use when you are involved in a pot later with players.  So pay attention, ignore your phone, watch the table and play less tables online so you can remember the action better.

To be the best, you have to beat the best.  Do not fear any player at the table and don’t let a preconceived opinion of how good or bad a player is affect how you play against them in any given hand.  Players are human with changing emotions potentially affecting and influencing their play.  Assess and adapt accordingly, but battle boldly.

Remember decisions taken off the table directly affect those decisions made on the table. Your lifestyle choices when not playing poker will affect how good you play when you’re at the table.  Getting enough sleep, eating healthy, doing regular exercise are all important.  Poker is a mind sport, so being alert is critical, it can be the difference with running deep in a comp or not, if fatigue kicks in.

Use break times productively.  Be efficient with the short time you get during a break in tournament poker.  Go for a brisk walk, to get the blood flowing after sitting for an hour or two, for example. Spending time texting updates, or discussing bad beats is a complete waste of time in my opinion.  Avoid negativity by surrounding yourself with positive, happy, fun people. Take time to laugh and relax.

I would recommend making time to play satellite qualifiers.  Being successful in these, will mean playing bigger comps for a fraction of the price, taking the pressure off playing outside your money comfort level.

I have already made sure to qualify for the main event via a satellite.  There are many more running daily online, which you can still play and have a chance at winning your entry for less, like me, too.  I hope you do, as it’s set to be an amazing online comp, with a ridiculously good structure, not usually seen at this buy in level, aimed at recreational players and pros alike.

Even more so though because it is going to be the first ever Online Goliath and we know how special “first” experiences are, so please don’t miss it! It’s your chance to be the next name on the enormous Goliath trophy alongside the previous champions. Lots of luck.

For more information on the National Online Goliath, click here. 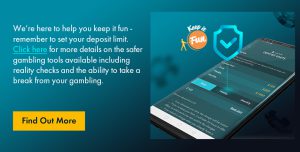