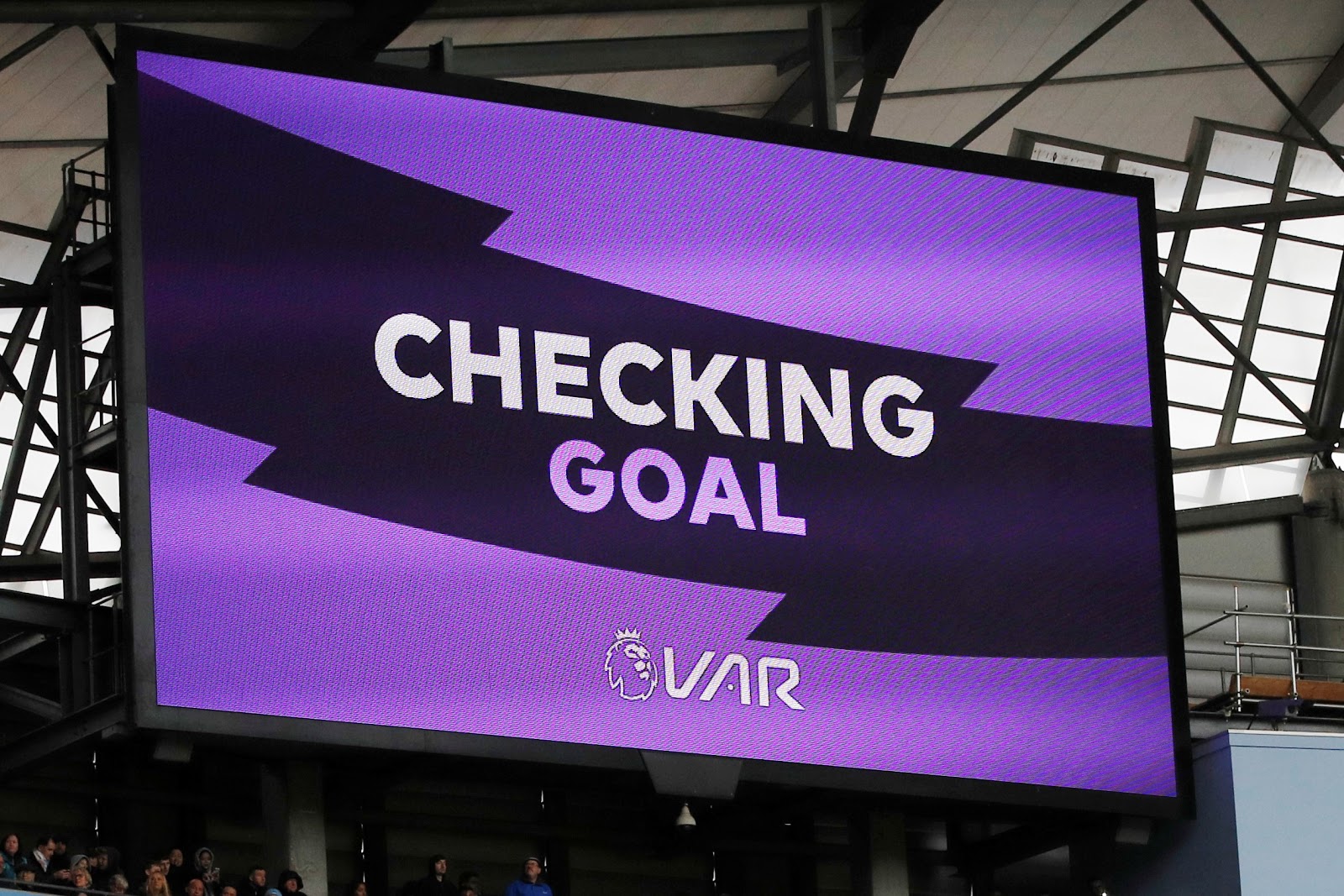 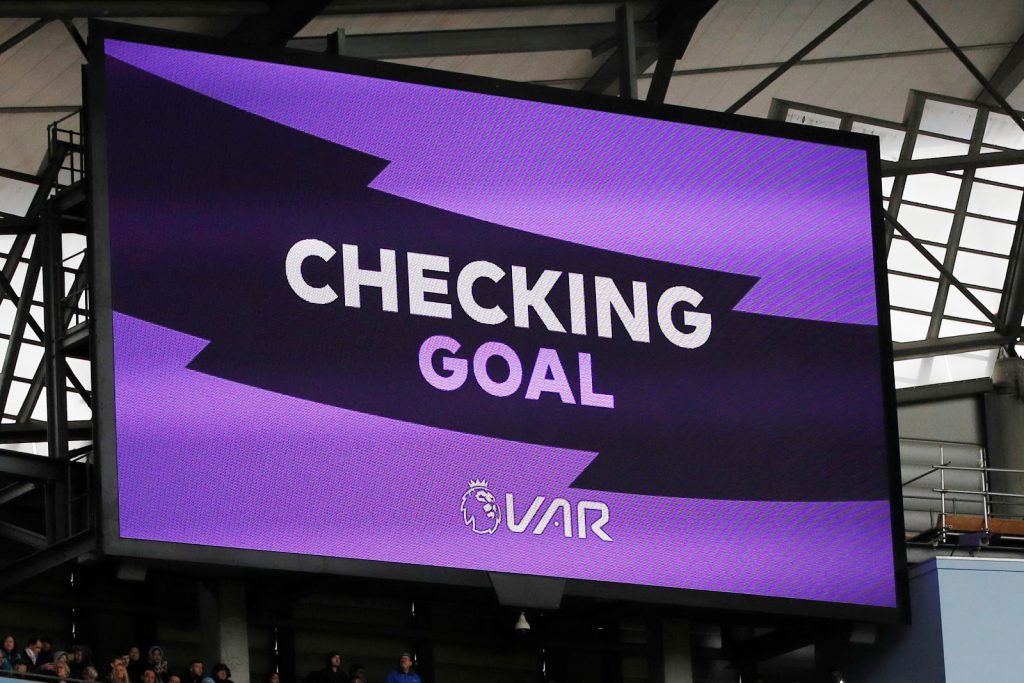 As we now look ahead to the 2020/21 Premier League season and what that may look like in the current climate with all the schedule changes that are coming, now makes for a good time to reflect on Year One of VAR.

Having been brought into the Premier League this past season after successful trials in other major European football leagues, the Champions League and domestic cup competitions, it’s fair to say that the addition of VAR was a controversial one.

On the whole, VAR overturned a total of 109 decisions in Premier League games this past season, and we at Grosvenor Sport have taken a look at some of the most controversial decisions – and non-decisions – made by VAR in its first season.

Arsenal took an early 2-0 lead thanks to goals from David Luiz and Sokratis when they took on Crystal Palace back in October, but were pegged back by the Eagles early in the second half.

The Gunners thought they had grabbed a late winner when Sokratis thumped the ball home late on after a goalmouth scramble, but a lengthy VAR review deemed that Calum Chambers fouled Luka Milivojevic in the build-up to the goal, keeping the score at 2-2 which is how it finished.

A decision which cost Arsenal two points on the day and some vital momentum going into November.

In a top of the table clash back in November, Liverpool were unbeaten and had established a five-point lead over rivals and defending champions Manchester City by the time they met at Anfield.

Just five minutes into the game, Bernardo Silva attempts to put a cross into the Liverpool box intended for an unmarked Raheem Sterling, but it deflects off the arm of Trent Alexander-Arnold at the near post and is eventually cleared from danger. 20 seconds later, Liverpool take the lead when Fabinho rounds off the counter attack.

VAR took a look at the incident and decided it was not handball and no penalty was awarded to Manchester City, meaning Fabinho’s opener stood. Liverpool went on to win the game, move eight points clear and eventually win the title, but say a penalty was awarded, scored and City went on to win the game, the six-point swing means the Reds’ advantage would’ve been cut to just two points, and maybe the title race has a different ending.

The first of two hugely controversial VAR incidents at the Tottenham Hotspur Stadium when, looking back, had huge ramifications on the Premier League season.

After a struggling Watford side took a shock early lead through Abdoulaye Doucoure when these teams met in November, the visitors thought they would be rewarded with a penalty when Jan Vertonghen’s clumsy challenge on Gerard Deulofeu caused the winger to tumble in the box.

VAR took a look at the incident and despite making no contact with the ball and seemingly tripping up Deulofeu and bringing him to the ground, Vertonghen didn’t foul the Spaniard and the on-field decision of a goal kick was upheld. The impact of that decision is felt late in the game.

Spurs rode their luck in the first half when VAR decided not to give Watford a penalty and the chance to extend their lead to 2-0 after Jan Vertonghen seemingly fouled Gerard Deulofeu in the box, and the video assistant looked favourably again on Spurs for their equaliser.

Toby Alderweireld’s long punt forward was headed into the air by Christian Kabasele and Ben Foster was unable to gather the ball cleanly as an on-rushing Dele Alli brought the ball down and finished into the empty net to bring Tottenham level.

All goals are reviewed by VAR and the replays seemed to indicate that the ball was controlled by the upper arm of Alli before he scored the equaliser. Unable to conclusively say either way, the goal was allowed to stand, meaning Spurs were level. The game finished 1-1 and Watford felt aggrieved as they saw two points slip away, two points that would have kept them in the Premier League, avoiding relegation to the Championship, if they saw the game out.

In a five-goal thriller at the Amex Stadium back in October, Brighton found themselves 2-1 down with less than 15 minutes to go as a long ball was floated forward for Aaron Connolly, who went down under an innocuous challenge from Michael Keane which was brushed aside at the time.

VAR takes a look at the incident and awards a surprise penalty to the hosts, scored by Neal Maupay, restoring parity on the day. An own goal four minutes into injury time by Lucas Digne handed Brighton just their third league win of the season, putting some breathing space between themselves and the bottom three.

While they finished seven points clear of the drop, if Brighton had lost that game, they would have been sat just one point clear of the drop after 10 games and perhaps that relegation dogfight has a different ending.

In a tightly-contested affair at the Tottenham Hotspur Stadium, the hosts had a 1-0 lead mid-way through the second half but Chris Wilder’s side believed they had scored a valid equaliser when David McGoldrick finished off a great team move for his first Premier League goal of the season.

It went to a VAR review, a review which lasted several minutes which in itself tells you how close the call is. In the build-up to the goal, the ball was played wide to John Lundstram out on the right, he then crossed the ball which was headed clear by Eric Dier, and in the next phase of play, the ball was put across the box for McGoldrick to slot home.

The never-ending VAR review decided that Lundstram’s toe was offside by the barest of margins in that build-up, therefore ruling out the goal. The Blades did eventually equalise through George Baldock and the game finished 1-1, but if Sheffield United had won the game, then come the end of the season, Tottenham would not have qualified for next season’s Europa League.

VAR had its work cut out for them in Arsenal’s clashes with Crystal Palace this season. Having outlined how the Gunners saw the win slip through their grasp at the Emirates at the hands of VAR, it happened again at Selhurst Park.

With the game level at 1-1 with around 25 minutes to play, Pierre-Emerick Aubameyang went in with a strong challenge on Max Meyer, but walked away with just a yellow card for his actions. VAR took a look at the challenge and upgraded the offence to a red card, and Aubameyang was sent off.

Arsenal held out for the draw, but Aubameyang missed the next two games, the draws against Sheffield United and Chelsea who were both vying with the Gunners for a European place. Aubameyang’s presence in those games could’ve helped Arsenal find a way to claim all three points and move further up the table.

Those two games were the only games Aubameyang didn’t feature in as he scored 22 goals in 36 Premier League appearances, finishing one goal behind Jamie Vardy in the race for the Golden Boot. If he had featured, it’s a strong possibility that Aubameyang would’ve at least tied Vardy’s goal tally and won the Golden Boot for a second consecutive season.

One of the standout VAR controversies of the season took place at Goodison Park when Everton welcomed Manchester United back in March. Dominic Calvert-Lewin gave the hosts an early lead inside three minutes, but January signing Bruno Fernandes pulled United back onto level terms at the half-hour mark.

It would stay poised at 1-1 until deep into injury time when Dominic Calvert Lewin fired a shot in at the United goal which deflected off Harry Maguire and beyond David De Gea into the corner and the Toffees believed they had stolen the win.

The United players protested that Gylfi Sigurdsson, sat on the floor inside the six yard box, was in the line of sight of De Gea who didn’t make an attempt at the save. VAR reviewed the goal and deemed that Sigurdsson was obstructing De Gea’s vision, resulting in an offside call and the game remained 1-1.

While Ole Gunnar Solskjaer’s side finished comfortably in the top four, the point gained at Goodison lifted United above Wolves into fifth at the time and saw them finish above Chelsea on goal difference at the end of the season, impacting their Champions League seeding for next season. If they had lost then maybe the shake-up for the Champions League places might’ve settled differently.

What are some of the most controversial VAR decisions that have affected your team this season, and do you think it has been a good addition to the Premier League? Let us know in the comments below!