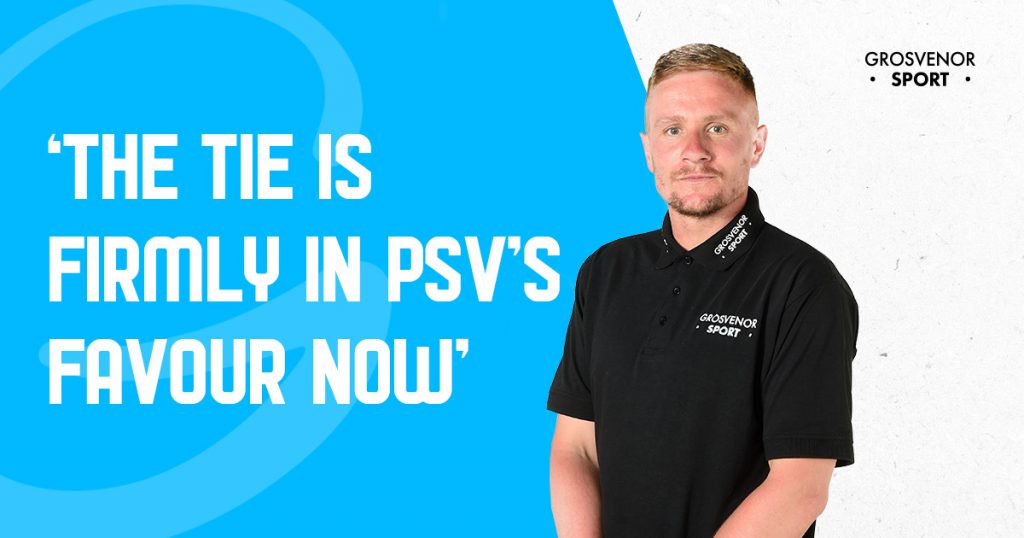 A 2-2 draw in the first leg against PSV, another very positive performance from Rangers in Europe – was it important that they had the first leg at Ibrox?

Rangers playing at Ibrox in the first leg was important, but drawing 2-2 has put them at a disadvantage going into the second leg.

The tie is firmly in PSV’s favour now. If you’d have offered them [PSV] a 2-2 draw before the game, they’d have taken it because now they’ll go into the home leg favourites and I expect them to win.

This scenario has happened to Rangers so many times in Europe and for me, this is where Giovanni Van Bronckhorst has been really good. In certain ties where they’re underdogs, he’ll change tactics and personnel which has worked.

I make PSV strong favourites but it wouldn’t surprise me if Rangers went over to Holland and won.

What do Rangers need to do to overcome the challenge?

They definitely need to defend set-pieces better. If they’re going to defend like they did in the first leg in Europe then it’s going to be very hard to win games of football. Over the last year, they’ve been very good but if you look at Tuesday night, James Sands, who is predominantly a central midfielder, was playing next to Connor Goldson.

For the second leg, they need to get someone like Ben Davies or John Souttar in next to Goldson because although he done well last night, Sands can’t play at centre-back in Europe.

Will the second leg be as tight as the first or will Rangers get blown away by PSV?

Rangers won’t get blown away, it’ll be a tight game. They have great experience in the squad and have also been in the same situation before. They won’t be panicking and I’m sure they’ll be quietly confident that they can go over and nick a win.

Tom Lawrence with another goal on the big stage. Is he shaping up to be one of the Rangers’ most important players?

Tom Lawrence is fast becoming one of Rangers’ most important players. He’s a lot like Ryan Kent, but what separates the two players is that Lawrence brings goals and to get that type of player on a free transfer is unbelievable business from Rangers.

Will Hearts playing at Tynecastle in the second leg of their tie suit them?

Going back to Tynecastle for the second leg against FC Zurich will be so important for Robbie Neilson and Hearts. Neilson has transformed the club and the team to play attacking football all the time so it’ll be interesting to see if he continues the same policy in Europe.

I have no doubt that if Hearts can come back to Scotland with a positive result, they can beat FC Zurich in the second leg. They’re capable of beating anyone at Tynecastle.

Hearts couldn’t have hoped for anything better than a 4-1 win last time out because going into a tie like Thursday nights, there’s nothing better than momentum and Hearts have had that since last season.

Good teams don’t rest on their players after a good season, they go and add new ones and that’s exactly what Robbie has done. A lot of the responsibility was on Liam Boyce and now they’ve signed Lawrence Shankland who can guarantee goals.

They’ve done similar, adding Alan Forrest to the squad to help Barrie McKay and it just goes to show that Neilson’s recruitment has been spot on since he came back to Hearts.

Do you agree with Andy Halliday that Barrie McKay deserves a Scotland call-up?

Barrie McKay definitely deserves a Scotland call-up. Over the course of the last year, outside Celtic and Rangers, McKay has been the best player in the league.

McKay is a lot like Tom Lawrence, they’ve both got that positive arrogance that you need at the top level and he should be in the Scotland squad, even if he’s added as a substitute. It is a no-brainer that Steve Clarke adds him to the set-up.

Could Hibernian provide an upset to Giovanni Van Bronckhorst this weekend?

Hibernian won’t provide an upset to Rangers on Saturday. They were poor against Livingston and aren’t in a good enough place. Rangers are also very good at maintaining their league form after a European night.

Getting Martin Boyle back at the club is massive because he always plays well in these sort of fixtures. If they manage to nick a result against Rangers, I have no doubt it’ll be because of Boyle.

Will Hearts’ game on Thursday have a big impact on the game against Celtic on Sunday?

It’ll be a tough 90 minutes for Hearts in Zurich plus all the travelling and the last thing they’ll want is a match against Celtic. Celtic are relentless and don’t give their opposition a second.

Celtic had a good record against Hearts last season and I think they’ve gone up a gear this campaign. It’ll be really tough for Hearts to get a result against Celtic.

Is the Ross County tie a must-win for Kilmarnock?

It’s not a must-win at all. Derek McInnes has had a really tough start. You could worry about the players’ confidence levels but they have a really, really good manager in Derek McInnes who’s been there and done it.

It won’t be easy against Ross County who finished in the top six last year and are very strong at home so I think Derek would bite your hand off for a draw.

More pressure is on Ross County this weekend than it is Kilmarnock.

How have you viewed Aberdeen’s start to the season?

A bit of football management is down to luck. Jim Goodwin would’ve been looking to build momentum following the win against St Mirren and then Motherwell go and confirm a new manager and quite a lot of the time when a new manager is announced, the first game the team have a bounce.

Jim won’t use that as an excuse, he’ll know that his own team need to improve and he knows that they’re not the finished article but they’re a lot more competitive than they were last year and they’ve replaced Christian Ramirez with Bojan Miovski who is a class above.

Goodwin’s aim will be to finish third but I think it’ll take them a good couple of years to do so.