This Premier League season has been like no other. Lasting nearly a full calendar year as a result of the COVID-19 pandemic which caused all sport to go on a three-month hiatus in the Spring, we saw the first ever Premier League games in June and July over the last six weeks along with another unprecedented event – Liverpool winning the Premier League for the very first time.

A season which no one will forget, now’s as good a time as any to look back at the campaign and select our Team of the Season as teams prepare for their final games of the season. This is the Grosvenor Sport Premier League Team of the Season for the 2019/20 campaign.

At the time of writing, Nick Pope has been an ever-present between the sticks for Burnley this season and has enjoyed arguably the best season of his career. With 15 clean sheets already this season going into the final day, Pope is leading the race for the Premier League’s Golden Glove – tied with Ederson for the most clean sheets in the division. His performances in goal have helped Burnley record their highest number of wins in a single Premier League campaign and going into the final day they need just one point to record their highest-ever points tally.

Trent proved that last year’s creative explosion was not a fluke, backing up his 12 Premier League assists by going one better this campaign with a game to play. Still only 21, Trent has been an ever-present in a Liverpool side that ran away with the Premier League title and has pretty much cemented his status as the world’s best fullback.

The towering centre-back has anchored Liverpool’s back line with dignity and class this season, playing every minute of every game as the Reds romped to the league title. While his partner at the back has changed throughout the season due to injuries, van Dijk’s consistency helped Liverpool secure 15 clean sheets throughout the campaign, one fewer than Manchester City.

As mentioned, Burnley are on course to record their best-ever Premier League points tally, largely down to their stout defence which has kept 15 clean sheets already this season as Nick Pope leads the way for the Golden Glove. A lot of that success comes down to the back four in front of him, a unit that James Tarkowski marshalls excellently year in and year out.

At £8m, Andy Robertson will go down as one of the greatest bargain buys of the modern era as he adds the Premier League to the Champions League, Club World Cup and UEFA Super Cup to his honours list this season. For the second season in a row, Robertson has recorded 11 Premier League assists and his power and pace down that left flank has been a mainstay of Liverpool’s prolonged success.

The Liverpool skipper has anchored Jurgen Klopp’s midfield excellently this season as he closes in on a decade at Anfield. His leadership and commitment has helped deliver Liverpool’s maiden Premier League title while also chipping in with some big goals, netting four times and providing five assists throughout the campaign. In a midfield group that has spent nearly £150m in the last two years on the likes of Naby Keita, Fabinho, Alex Oxlade-Chamberlain and Takumi Minamino, the fact Henderson cannot be lost from that trio in the middle of the part is a testament to his work ethic.

It could have been easier to select someone like Mohamed Salah for this spot, but it’s hard not to reward Adama’s breakthrough campaign. The Spanish winger has been lamented in years past for not having an end product, but the former Barcelona academy graduate has put those concerns to bed this season, scoring four goals and providing nine assists, seven of which to top scorer Raul Jimenez – the most common ‘assist to goal scorer’ combination in the league this season.

In a year where Roberto Firmino has struggled for goals, Sadio Mane stepped up to the plate to cover his downturn in production, scoring 17 goals in 34 appearances so far this season – a goal every other game. The Senegalese winger has also provided seven assists to his teammates and has been the star performer in that Liverpool front three, often outshining Mohamed Salah on the other wing.

In a season where Leicester could clinch a return to the Champions League, they wouldn’t have been anywhere close to doing so if not for the goals of Jamie Vardy. Now 33, Vardy is showing no signs of slowing down as he’s bagged 23 goals in 34 games so far this season with a game to go, looking set to clinch the Premier League Golden Boot in the process having already broken into the Premier League 100-club.

Danny Ings’ career has been pretty much defined by injuries leading up to the 2019/20 campaign, but enjoying the first season in some time that hasn’t been blighted by an injury, Ings has reminded us of his goalscoring prowess, enjoying the best top flight season of his career, netting 21 goals in 36 games and sits two goals back of Vardy in the Golden Boot race entering the final day. 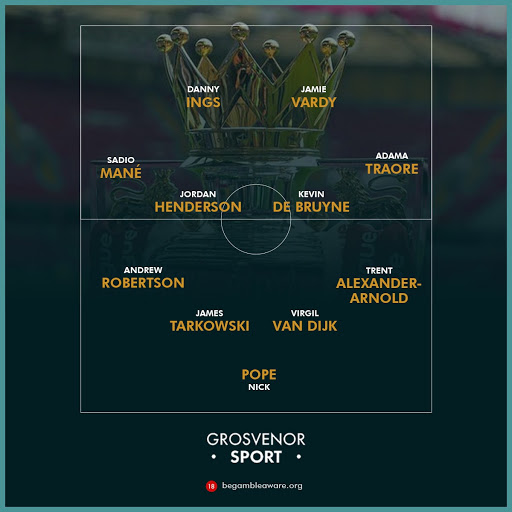 Here’s a look at our complete team of the season. Do you agree with our picks? Are there any players you think should have made the side? Let us know in the comments below!