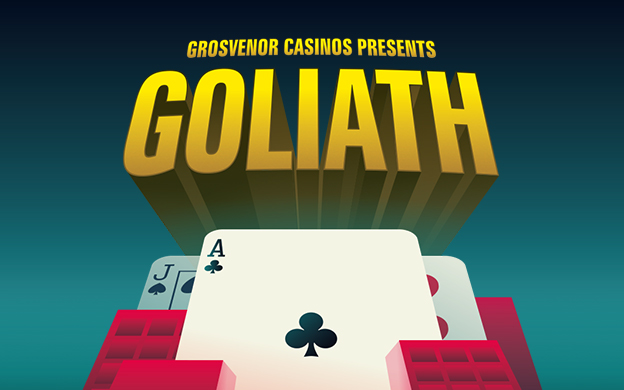 When I first tried online poker some 11—12 years ago, I began by playing micro stakes cash games and Sit & Gos (SNGs).

I didn’t even consider Multi-Table Tournaments (MTTs)—the prospect of competing against 100 or 200 players daunted me. I didn’t have the (over?)confidence to believe I would win the 1st prize; the odds seemed dire.

The idea that one day, I might compete in fields of 10,000+ online (or thousands of players in a casino) and have a serious chance of reaching the final table, was unthinkable.

Brits have a culture of rooting for the underdog. One of the fun things about MTTs is that the underdog can triumph. The amateur can outdraw the pro; the short stack can come back from a ‘chip & a chair’; the trophy is anybody’s for the taking.

With Goliath fast approaching, Grosvenor asked me to pen a few words of advice for my fellow punters. David & Goliath is of course a parable of the underdog—of beating the odds. Just as David was able to turn the odds in his favour using his skill with a slingshot, we can find ways to bolster our prospects of surviving the bumper field in the Goliath Main Event.

Over the years, through a mixture of study and experience, I’ve found a few edges in poker. Hundreds of articles have been written about poker strategy—when to bet, when to check—so I thought I’d talk about some more neglected areas. There is a family of edges in our favourite game which, collectively, I think of as the ‘soft skills’ of poker. I learned some of these from my online experience, and others from making the transition to grinding live MTTs.

I shall discuss a few of these soft skills, particularly as they apply to approaching a huge live event like Goliath.

The Goliath is a three-day tournament with deep stacks and a slow (40 minute) clock. Playing with 100+ big blinds is fun, but it also means you have a lot to lose! It only takes one error of judgment and it’s all gone.

I’ve played tens of thousands of tournaments online and experienced every hero-to-zero disappointment imaginable, but I’ll concede that emotions run wilder in live tournaments. This is largely due to the slower pace; it’s hard not to develop an attachment to your hard won chips after hours or days of grind.

Setbacks are inevitable along the journey to the final table—you’ll be outdrawn dozens of times, find yourself on the wrong end of a number of ‘coolers’, and might make some mistakes too. It’s important you don’t compound these setbacks by making further mistakes due to tilt.

Tilt control is paramount in tournaments, particularly as the gravity of decisions ramps up as time passes and stacks increase. A decision on day three could be worth 100 or more buy-ins!

If you feel tilted after a setback, remind yourself that your remaining stack has a quantifiable equity. Don’t set your last £500 on fire just because two minutes ago you had £1000. One of the adjustments I make when I feel tilted is to play a little tighter. This is because you get into more difficult situations with the more marginal hands, and in no-limit hold’em, mistakes compound themselves down the streets. In any situation (pre- or post-flop), if in doubt, lean towards folding.

Also be self-aware. Whether or not a big setback has put you on tilt, anyone at your table who’s smart may expect you to be tilted, so bluff attempts may be less profitable than usual, and people may be less likely to try and bluff you—again, making it smarter to play tight and lean towards folding.

No matter how well you play, you can’t play poker for three days without getting unlucky at some point, so it’s crucial that you handle the disappointment of bad beats in the right way.

It is surprising how upset players can get over relatively trivial beats. Perhaps this is an area where experienced online players—who have played literally millions of hands, and seen every cooler and every outdraw imaginable—have an edge. We’ve ‘seen it all before’ and don’t automatically expect to win.

The feeling that we ‘should’ win, for example when dominating with AKcc vs A5hh, is detached from reality. AKcc will win 68% of the time; A5hh 28%; and we’ll chop the pot 4%. To think one is ‘supposed’ to win is an irrational feeling of entitlement.

If you find bad beats very upsetting, perhaps try to reframe the situation. Pre-empt the disappointment by realigning your expectations. When you get AKcc in vs A5hh, before the board is dealt, remind yourself that your opponent is entitled to win 28% of the time.

You do not ‘own’ the whole pot just because you are the statistical favourite. Imagine the pot being divided unequally, with the underdog hand owning the smaller slice of the cake, and your hand owning the larger slice.

When you get it in as a 70/30 favourite and do win, you have actually run above expectation—because you’ve been awarded the whole cake, rather than just your theoretical share.

Moreover, if you win two 70/30’s in a row, you have actually got lucky in every mathematical sense. You may well congratulate yourself for having got it in ahead twice, but even glossing over the possibility you were lucky to find the dominating hand in one or both of those spots, you’re the underdog to win both showdowns. 51% of the time you will lose one or both all-ins.

Entitlement is cognitive bias, and it is your enemy in poker. Remind yourself: “My opponent will win this hand some of the time. Whatever happens, happens.”

Poker can be a frustrating game. How you manage and direct that frustration can make or break a poker player. Just as being upset about the ‘unfairness’ of outdraws is a waste of energy, so is directing your frustration towards other players.

I won’t pretend I’ve never thought, exasperated after losing a hand, “How on earth did this guy get to the river with that hand??” It’s important to acknowledge our emotions, but not let them rule us. If we play our own hand correctly, it’s variance that’s to blame for our loss, not the other player. They were actually helping us (inadvertently!) through their bad play. We want people to make stupid calls against us; but we’re not entitled to win every time.

After losing a hand to a bad player who got lucky, a good practice is to develop a habit of consciously directing your thoughts in a positive direction.

Don’t think, “What an idiot for calling a big bet on the turn with a gutshot draw!”

Rather, think, “Ok, this guy is making loose calls on the turn—and therefore almost certainly on the flop and pre-flop as well. So these are the adjustments I’m going to make in future hands versus this player…”

Instead of being annoyed that they made a loose call, figure out why they made the loose call. Even bad players have method in their madness.

* Because they have a general predisposition towards not giving up on hands? (They are overly optimistic/sticky; a ‘calling station’.)

* Because they have poor self-discipline? (Deep down they know they should fold, but they call hoping to get lucky.)

* Because they were temporarily tilted?

* Because they are creative? (Perhaps they made the call knowing they didn’t have the odds to make their hand, but had a plan to bluff certain rivers?)

Dismissing someone’s play as simply bad is a trap. In poker, not only do you have to figure out when and why to bet or check; you must also figure out your opponents’ understandings of the game—you must decipher their patterns of play, and infer the rationale behind their betting actions.

Even a clueless player who appears to be ‘clicking buttons’ will arrive at each street with a certain distribution of hands, albeit a less rigidly constrained range than that of a more experienced player.

Here’s an example of a constructive train of thought after being outdrawn by a bad call:

“Ok, so this guy on my left hates to fold. In future hands, out-of-position to this guy, I’ll bet thinner for value [e.g. I’ll bet some more top-pair hands on the turn that I’d otherwise check], and I’ll use greedy bet sizings to extract maximum value. I’ll make a lot of profit on certain board textures by betting value hands twice, then [since he’s getting to the river with a lot of weak/unmade hands] checking a brick river, to induce bluffs. And I’ll only bluff the turn if I’m willing to pull the trigger on the river too.”

NLHE tournaments are highly volatile. A player can nosedive from chip leader to short stack in a few hands, and the reverse is also true. Much of this is outside our control.

It’s easy to feel excited when we gather momentum and suddenly build a stack, but heightened expectations can be our downfall. It’s important to stay in the moment and take the game one hand at a time.

Anyone with any tournament experience can attest that a player who doubles up to 50k chips, but then loses half those chips again, will have a very different mental state from someone who loses half their starting stack, but then doubles back up to 25k. Both players now have the same chip stack, but the player who had 50k is more likely to be agitated.

There is another insidious form of tilt however, which has been nicknamed ‘winner’s tilt’. A player on a heater often feels invincible, particularly if they are inexperienced and don’t realise they have been winning in spite of mistakes, rather than because of playing well. This cognitive bias can lead to reckless or optimistic play, and those chips can evaporate as quickly as they were accumulated.

In reality, much of poker is outside of our control. Relinquishing control goes against our nature as human beings. Indeed players are wont to exhibit quasi-superstitious behaviour—calling cards when all-in (‘DEUCE!’), and ironically invoking the gambler’s fallacy (“I’m due a hand” / “He can’t have aces again!”)

If you build a big stack, try not to get ahead of yourself. Remind yourself that you can lose your chips at any time, possibly through circumstances outside your control, so just live in the moment and focus on getting each individual decision right in a vacuum.

Continuing in the vein of living in the moment, my final piece of advice is: have fun! It’s pretty hard to win a tournament with thousands of entrants, but it’s not hard to have fun at Goliath. There is a unique infectious buzz, a real festival atmosphere. Expect the full gamut of poker players, from pub players to online pros. We’re all united by our love of the beautiful game. Take it one hand at a time and enjoy yourself.

For all information on Goliath and full satellite schedule visit the official Goliath page.