Goliath Pro Tips: OK, I’ll Tell You What to Look For at Goliath!

In the 1990s the number one European Poker Festival that everyone went to was the Master Classics of Poker in Amsterdam (MCOP). I remember in 1997 they got Mike Caro to give a presentation and lecture and a large part of that was on poker tells and body language.

I also remember he was trying to introduce a four colour deck into MCOP and Holland Casinos agreed to use it in the Seven Card Stud tournament – that was weird.

Mike Caro was ahead of his time.

A lot of what he talked about in that theatre at the Lido is true and I still relate to it when I play. At the Goliath a lot of the tells that he introduced us to will be in play. It’s obvious when you know, not so obvious when you don’t. By the nature of the event there will be lots of inexperienced players taking part. So what should you look for? What can you use to your advantage?

Ok, so let’s start a little with chips. A player pushing chips into a pot with show, maybe slamming them on the table, is trying to show strength and a player quietly putting chips into the pot, almost as if he doesn’t want you to notice is trying to show weakness. Mike taught us that ‘strong is weak and weak is strong’. So in other words call the first bet and be very wary of the second one.

Another good example might be where you have position on an opponent in a heads up pot. On the flop he goes for his chips, maybe even picks up a bunch looking directly at you, and then he checks!

Here he is trying to intimidate you. He is pretending he has a strong hand as he wants you to be wary or even scared and to check behind. If you ever see this just bet and take the pot down.

It can often be important to establish whether a player is doing something consciously or subconsciously. A player making a big bluff often sits there very quietly and they feel the pressure so don’t want to talk or bring any attention on themselves. They sit very still almost not breathing. They do this subconsciously. A player who sees the flop, likes it, and wants to bet may flick their eyes towards their chips as it comes down. This is because they are thinking of betting. One of my favourites when the flop comes down is how long a player looks at the three board cards. Say for instance you call a raise with two sixes and the flop comes down with a six on it. You instantly look away. You don’t want to bring attention to the fact that you have flopped a set. However if the flop comes 2 7 K you keep staring at the flop almost wishing that there was a six there!

It is important to realise though that tells may not be 100% accurate and when inexperienced players start looking for tells they often try to use them to call bets – everyone wants to be in action right? This can be dangerous. Tells can help but they won’t make you a winner on their own. You need a good solid strategy and good tactics. You need to make the correct decisions. Ask yourself each time you are dealt a hand what the correct, profitable decision should be. Don’t ask yourself ‘Do I feel lucky!’

One other thing that Mike touched upon back in 1997 was psychology. He told everyone in the studio to say this to themselves before they went to play poker. ‘I am a great poker player and a powerful winning force surrounds me’. Yes we know Mike can be considered a little eccentric and that might sound a bit nuts but I tried it and it worked for me. I won my first major tournament back in 1997 at that MCOP festival!

The Goliath is going to be a lot of fun, it always is. An understanding of what your opponents are doing and why may make it even better.

There are over 1,000 seats guaranteed to this event on Grosvenorpoker.com, why not dip in and win your seat on the cheap, you will see plenty of these tells in Coventry this year.

If you notice anything I have said or any fun tells of your own please Tweet me @joebeevers and let me know! 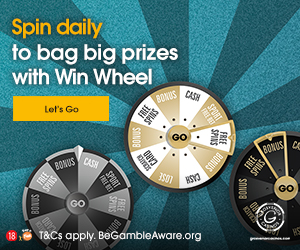 💷 Your club has the money to sign two of these three future England stars, who are you signing? 👹 Mason Greenwood… https://t.co/RlDuO85YaB