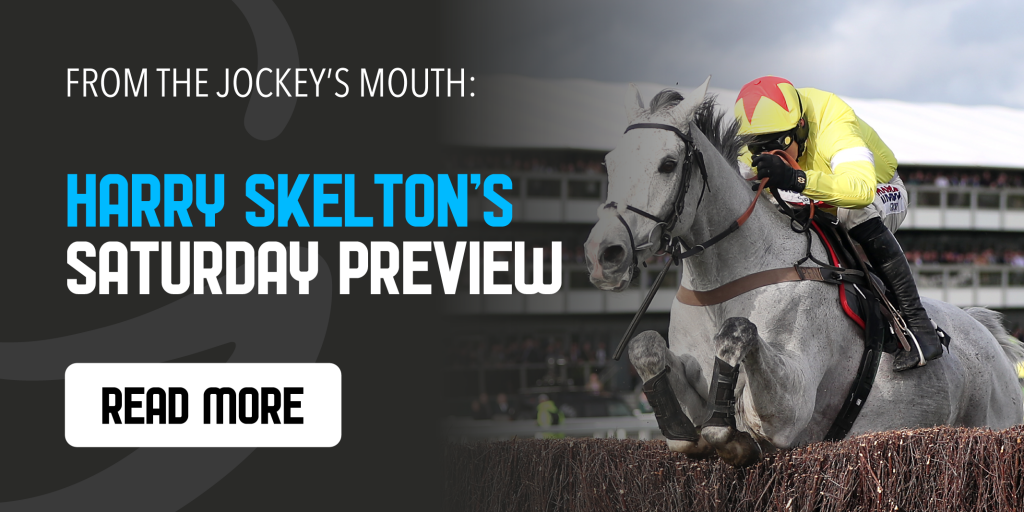 There’s good prize money on offer across the card at Warwick and we’re keen to support the meeting with plenty of runners.

I start off with Camdonian in the 2m5f novice hurdle (13:00). It’s a small but select field with two of our opponents quite highly rated. He’s got very little experience compared to the others, but he ran really well the last time at Chepstow. He’s had a nice break since then and this should be a good race for him to gain more experience. He’s a horse we like for the future and I hope he can run well.

Get A Tonic takes on the older mares in the 2m5f Listed hurdle (13:35). This looks a nice race to go for, with the track and trip sure to be to her liking. She’s done well this year, winning twice and then running well to get some black type in a good race at Cheltenham. She’s got a bit to find on the figures, but she’s still improving, and I think she’ll run really well. Indefatigable is a good mare on her day and she’s probably the one we all have to beat.

There are only four runners in the Kingmaker Novices’ Chase (14:05), but it looks a competitive field. Third Time Lucki has come out of his race at Doncaster absolutely fine. Obviously, the race fell apart a bit there, but he was impressive and jumped great throughout. I think a bit of nice ground around here will suit him. Edwardstone looks like the one we have to beat, but hopefully it stays dry between now and the race because on better ground I hope we have a good chance of turning the tables with him.

Horizon D’Ainay goes in the two-mile handicap hurdle (14:40). He steps into handicap company for the first time and I think he’s capable of being competitive from his mark. We’ve put a tongue tie on as he was just a bit weak in the finish at Southwell last time, and hopefully that will help him. I think he’ll run very well.

Bridget takes the ride on Amoola Gold in the Warwick Castle Handicap Chase (15:15). He’s got to carry topweight which is going to be difficult, and the handicapper has a tight hold of him at the moment. Bridget gets on well with him and we’re putting cheekpieces back on, which might help sharpen him up. Realistically, though, he’s got it all to do off top weight.

Colonel Manderson goes in the 3m2f handicap hurdle (15:50). He did it well in the end at Southwell and I think this step up in trip will help him. In Rem has been very progressive, winning his last four, and he’s probably the one we have to beat. I just hope the handicapper has caught up with him and hasn’t done so with Colonel Manderson yet. He should be very competitive.

In the bumper (16:25) we run Riskintheground. He has run two very promising races so far, first at Chepstow and then in a Listed race at Ascot. He’s been freshened up after a break last month, but he’s in good form and if he runs as he did at Ascot, then hopefully he can go close. There are a few unknown rivals in there, but Riskintheground sets a good standard.

Midnight River goes down to Exeter for the 2m3f novices’ chase (14:00). It was nice to get back on track with a win last time at Wetherby. We want to get a bit more experience into him, and I think this race will suit him well. He’s been working nicely at home and we’re looking forward to getting him back out again.

Lac De Constance makes the step up in class to Listed company (15:00) after winning over course and distance last time. This is obviously a much deeper race, but we know the track suits – he’s a big horse, so we wanted to keep him on an open, galloping track. After his win in December, we were always keen to come back for this contest. We think he’s a nice horse for the future and this will tell us a lot more about him.

Riggs runs in the Pertemps Handicap Hurdle (15:30). He was very disappointing last time, when he stopped quickly after the turn in at Warwick. I don’t know why that was, but hopefully we can just put a line through it and move forward. If he was to go back to his form at Haydock, then he will have a good chance.