All the action from Day 1b of the GUKPT Manchester Main Event.

Wow well what a day that has just been! The biggest Day one of any GUKPT Manchester Main Event with a massive 241 entries just for today! Giving us a total of 310 so far and late registration is still open. Players can buy in up until 11:55am tomorrow.

84 players have made it through today and again there is no runaway chip lead. Alan Carr finish just ahead of Aqeel Butt. The full counts for 1b are:

We will be back tomorrow for a noon start where there are 103 players coming back for another ten levels of play.

Players are now bagging and tagging.

Full chip counts will be up as soon as possible.

The players will now play five more hands before bagging up for the night.

Big stacks are building now and we have atleast 10 stacks around 100k.

Kellett, Trigg, Woody, Mallu will all be bagging up top ten stacks.

Anthony Kennedy makes it 2,000 to play, Alli Mallu just rips the lot on for his 100k stack. Anthony thinks for around 20 seconds and calls it off to create a huge pot.

The board runs out

Sick for Anthony as he busts to the flush of Mallu.

The players are back seated as we begin level number nine.

221 entries so far today with two and a half levels to go. 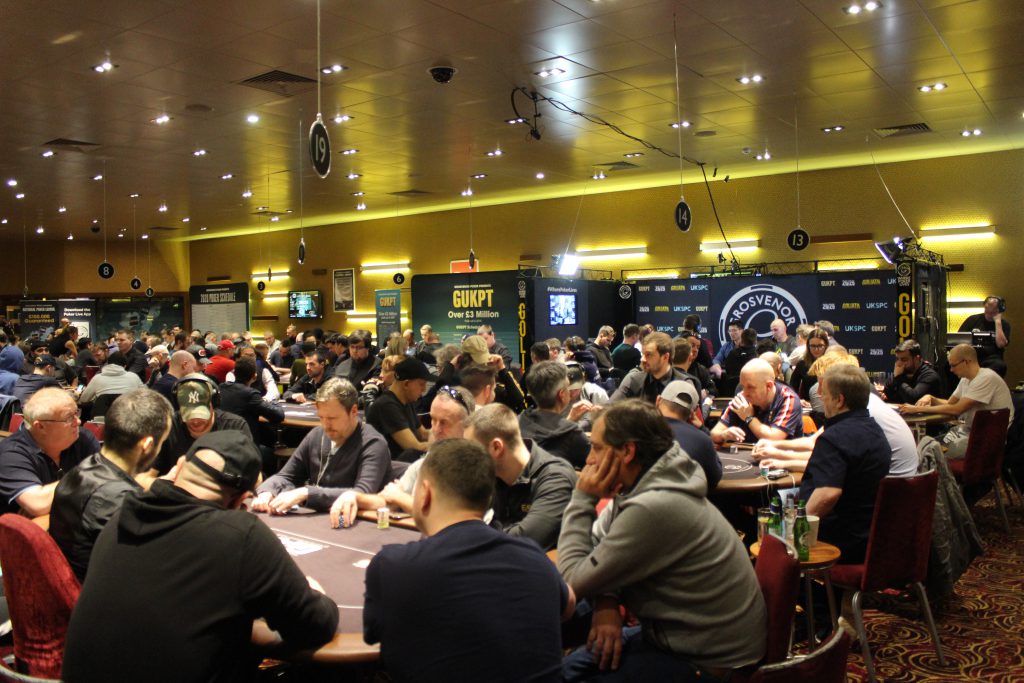 The blinds increase as we begin level number eight.

All players can re-enter if they wish as late registration is open for the full ten levels today.

We have a new feature table for you to watch for the next two hours of the GUKPT Manchester Main Event.
It includes Brett Angell, Katie Swift, Jeff Kimber & Sam Grafton!!
Watch it here – https://gros.casino/Live_Poker
Or on twitch here – https://www.twitch.tv/gukpt 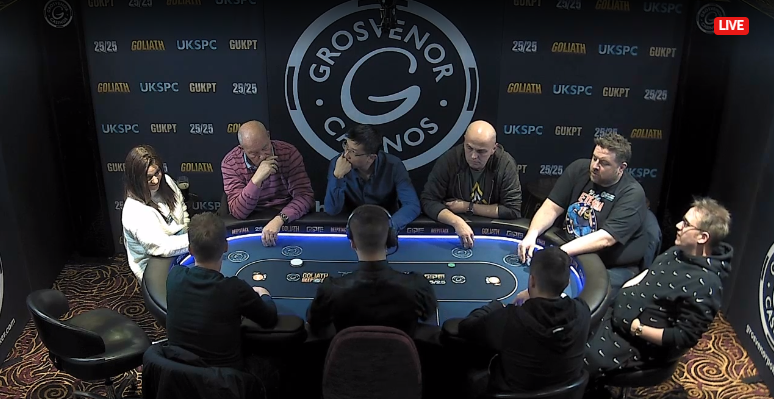 The most recent exits from the field:

The players are back from dinner as we begin level 5.

Nearly every table is in use in the cardroom and we even have Frankie dealing on one of the tables.

As we expected it is very busy here in Manchester for Day 1b of the Main Event.

The blinds increase as we begin level 4. 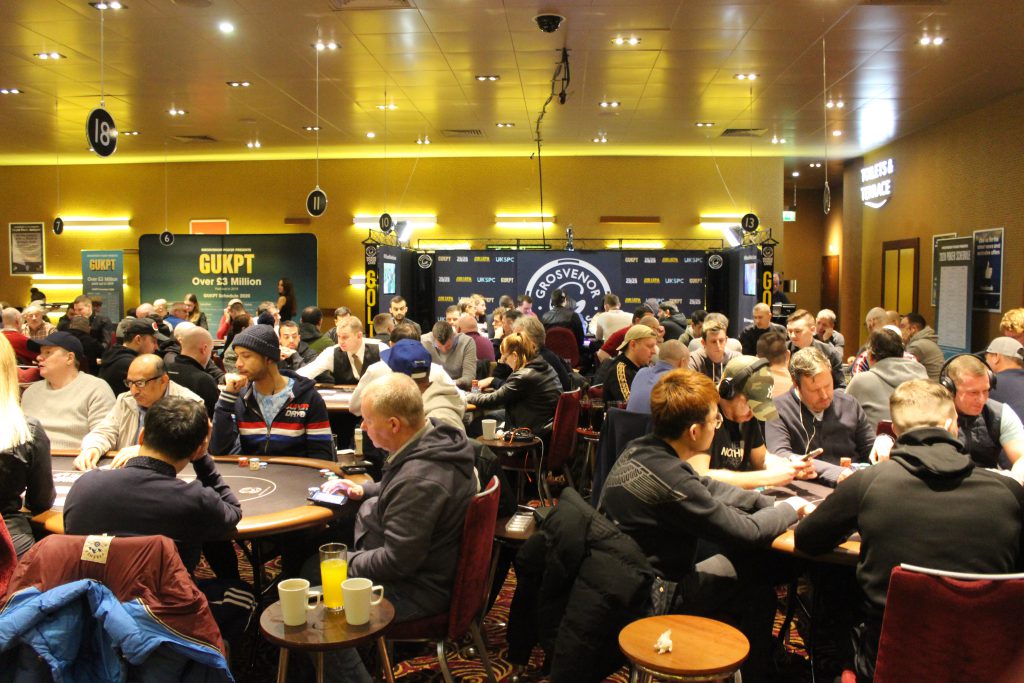 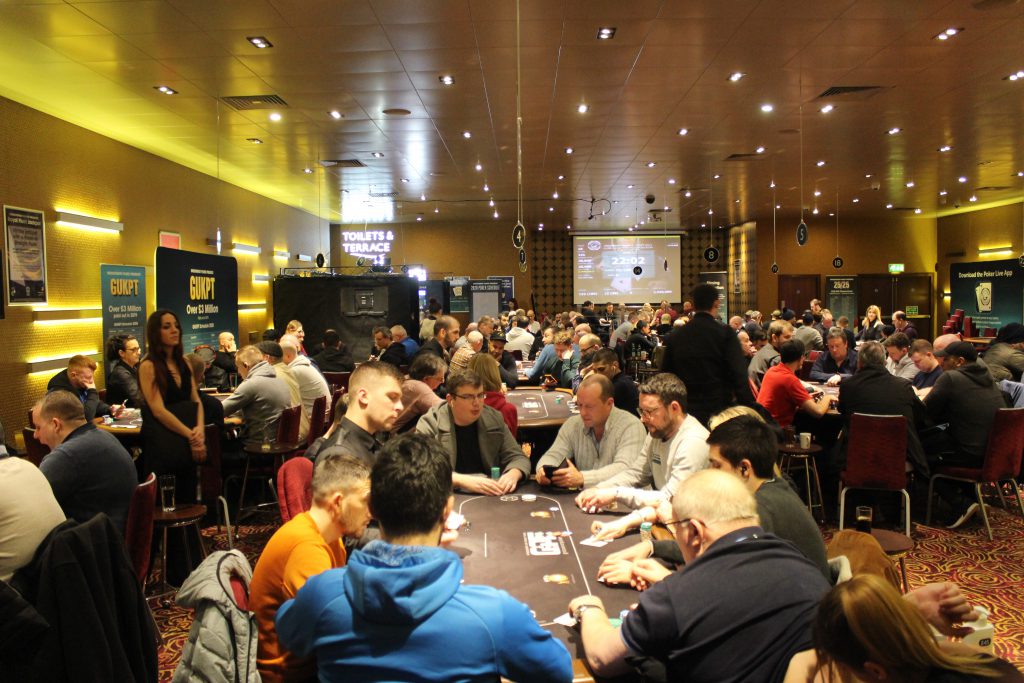 Beak time for the players as they take 15 minutes.

The £200k GTD has just been hit here in Manchester.

How big can the prizepool get as late registration is open all day.

A full player list will be up as soon as possible.

We’ll be seeing all these players today as they bagged themselves a seat last night.

The cards are in the air as we begin Day 1b.

There are 74 players registered to start the day.

Good morning and welcome back to the Bury New Road Casino in Manchester for Day 1b of the £200,000 GTD Main Event.

Yesterday the numbers were a little low with 69 entries in total over the ten levels of play. 21 of those made it through and we will see them again on Saturday.

Today Day 1b begins at 12pm and we are expecting it to be super busy! Follow all the action here and on our live stream which can be found HERE!