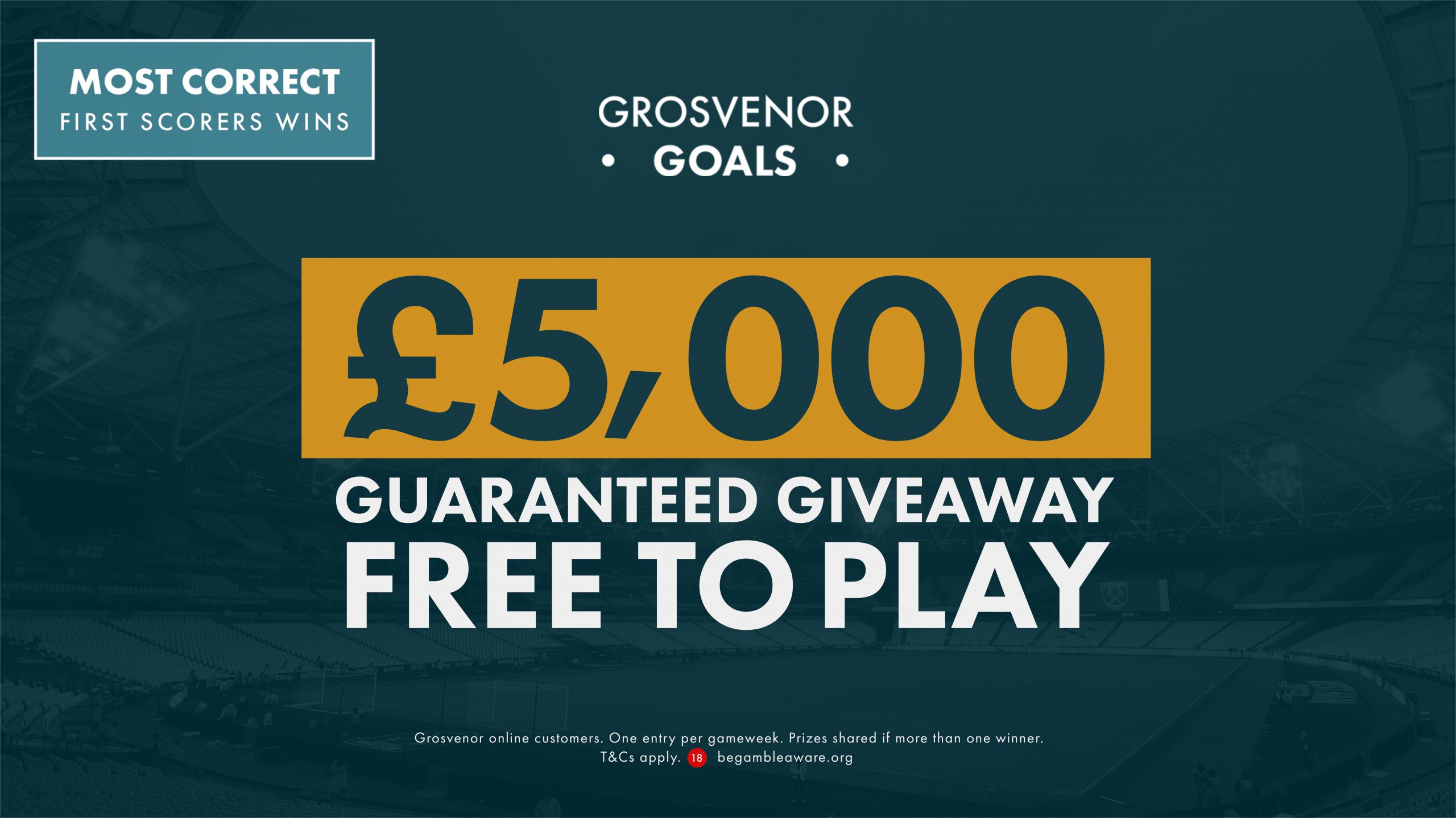 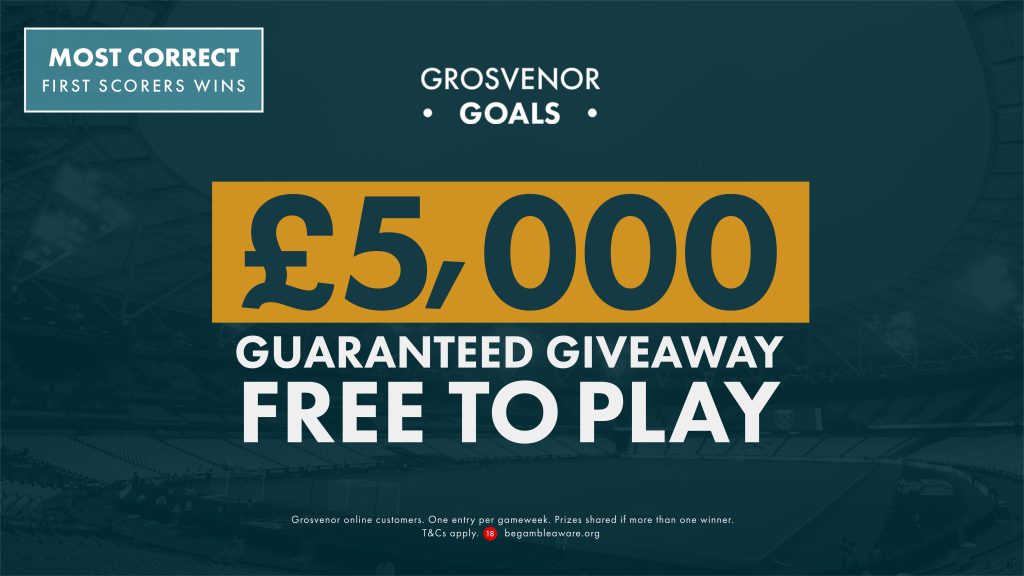 The wait is over as Liverpool were finally crowned Premier League champions in midweek. Despite the title race being over, there’s still plenty to play for over the final seven games of the season, with European places and the relegation battle still to be settled.

As we do every week, we’re running Grosvenor Goals in the Premier League this week, where if you can select the first goalscorer correctly in our 10 selected games, you win £1M! Last week, we gave away a guaranteed cash prize of £5,000 to the player who selected the most first goalscorers. The punter who collected that guaranteed prize selected X out of 10 correct, not bad going.

This week, there’s a guaranteed cash prize on offer again to whoever picks the most correct goalscorers, with that person winning £5,000, and of course, if you select any three correctly, you win a £10 free bet. Fancy your chances? Entries close at 5.25pm tomorrow.

We’re including an FA Cup clash in this week’s round of fixtures, and the odds are stacked against Norwich to find a way past a rampant Manchester United side. Anthony Martial scored all three goals as United beat Sheffield United 3-0 on Wednesday and now spearheading the forward line, we can see Martial getting himself on the scoresheet this weekend.

Time is running out for Watford to claw their way out of the relegation battle following their defeat at Burnley midweek. The pace and trickery of Ismaila Sarr in the final third has the potential to cause even the best defences problems, and Sarr did get on the scoresheet in a losing effort when the teams met earlier in the season.

A battle between two teams with little to play for, we see this being a very tight affair at Selhurst Park. Crystal Palace has won four in a row without conceding prior to their 4-0 defeat at Liverpool midweek, but we’re backing them to return to winning ways next time out, with Jordan Ayew playing a pivotal role.

Manchester United have put themselves in the box seat in the race for fifth in the Premier league, and who knows, maybe fourth isn’t out of the question. The midfield tandem of Bruno Fernandes and Paul Pogba has hit the ground running, with Fernandes especially at the heart of most attacks. Now on penalties as well having netted one at Tottenham and United being awarded the most spot kicks in the league, Fernandes seems a decent pick.

Newcastle have picked up four points from their two games post-lockdown so far, and look good value for them too. The same can’t be said for Bournemouth who look devoid of confidence and goals. We expect the visitors to pick up the win at the Vitality Stadium with the in-form Allan Saint-Maximin scoring.

Everton are yet to concede in their two games post-lockdown, picking up four points in the process, but we feel that run will come to an end against Leicester. Chelsea’s win against Manchester City has moved them to just one point behind third-placed Leicester, with Manchester United also closing the gap on the top four. Jamie Vardy is yet to have a shot on target in his two games back but we’re picking him to end his barren spell.

Arsenal stopped the rot against Southampton last time out with a 2-0 win, and should take care of business against bottom club Norwich next Wednesday. Aubameyang is yet to score since the Premier League returned having seen both his strike partners Alexandre Lacazette and Nicolas Pepe find the net – we like Aubameyang to join the party against Norwich.

Neither West Ham, Bournemouth, Aston Villa or Watford appear to be able to buy a win at the moment, and it’s unlikely that’ll change for the Hammers when they take on a Chelsea side fresh from a big win over Manchester City. Willian scored the decisive goal in the win over Pep Guardiola’s side and could make it two in two games.

Sheffield United have played three, won none, scored none and conceded six since the Premier League resumed earlier this month and look out of sorts, losing ground in the race for European football as they sit five points back of Wolves and Manchester United. Tottenham’s win over West Ham saw them jump the Blades in the table, and Heung-Min Son was impressive against the Hammers and would have opened the scoring if not for a marginal offside call just before half time. We’re picking him to stay onside this time.

Liverpool’s first ever game as Premier League champions will see them be given a guard of honour by the team they took the title from – Manchester City. In recent years, the Reds have had the best of City whenever the play, and Sadio Mane has been a permanent thorn in Pep Guardiola’s side. The winger bagged in the 4-0 win against Crystal Palace and will fancy his chances against a struggling City back four.

Here’s a look at our first goalscorer picks. How do you feel about our Grosvenor Goals selections this week, and who are you picking to be your 10 first goalscorers? There’s a GUARANTEED £5,000 to be won on this week’s games for the player who picks the most first goalscorers in the selected games, and a £1M jackpot if you get all 10 correct, so make sure you get your entries in. It’s free to play and the deadline for entries is tomorrow at 5.25pm.