Gameweek 38 of Grosvenor Goals is now open! Simply select the first goalscorer correctly in our 10 selected games, and you’ll win £1M! Last week, we gave away a guaranteed cash prize of £5,000 to the player who selected the most first goalscorers. The two punters who collected that guaranteed prize selected five out of 10 correct, not bad going.

This week, there’s a guaranteed cash prize on offer again to whoever picks the most correct goalscorers, with that person winning £5,000, and of course, if you select any three correctly, you win a £10 free bet. Fancy your chances? Entries close at 7:40PM SATURDAY JULY 18TH.

Despite a huge win over Liverpool on Wednesday, the Gunners European hopes are still looking slim and the FA Cup remains one of their biggest chances to secure continental qualification

Raheem Sterling has begun to find his goalscoring form with 6 goals in his last 5 starts and will be looking to add to that tally against a vulnerable Arsenal defence.

The two teams meeting at the Tottenham Hotspur stadium are both fighting for European qualification and a win for either side would be a huge boost to their chances. Leicester have won 2 in 6 and Tottenham’s Harry Kane scored a brace last time out against Newcastle.

Leicester are without central defender Caglar Soyuncu, who will miss the rest of the season following his red card against Bournemouth, so Kane should fancy his chances at home.

United come into the game in rich goalscoring form, with 20 goals in their last 7 fixtures and the front three, spearheaded by the resurgent Anthony Martial, has wreaked havoc on opposition. Frank Lampard’s side have exceeded expectations this season but still face huge question marks over their defence. The centre-back pairing has changed 3 times in 5 games for the Blues and Martial will certainly be relishing the opportunity to add to his 22 goals this season.

A tricky run of fixtures has seen Brighton concede 12 goals in the past 5 games however a huge win against Norwich looks to have secured survival for the Seagulls while Newcastle have lost 3 games on the bounce. With not much to play for either side, Leandro Trossard looks the best bet to open the scoring following a strong run of form for the Belgian, including the winner against Norwich.

The Blades ran out 2-0 winners against Everton in the reverse fixture and have been in fine form as of late with huge victories over Wolves and Chelsea pushing them towards Europe. David McGoldrick broke his duck in the Premier League with two goals against Chelsea and the 32 year old will be in the mood to make up for lost time against the Toffees, who have only scored 5 goals since the restart.

Wolves still find themselves with an outside chance for Champions League qualification and will be desperate to keep their chances alive. Palace have won just once since the restart and have lost 6 games in a row. The Eagles have been particularly leaky at the back and Wolves’ tricky wingers should have no problem teeing up Raul Jimenez, who opened the scoring against Burnley in his last game.

City have scored a combined 14 goals in their last two outings against Watford, although none were against current manager Nigel Pearson. With the Citizens enjoying great success against the Hornets and with striker Sergio Aguero still injured, Gabriel Jesus will continue to lead the line for Guardiola’s side. The Brazilian has scored 3 goals in his last 3 games as he looks to impress his manager ahead of the Champions League campaign to come.

With arguably the toughest run of fixtures to end the season, Villa still have a fighting chance to secure survival following a 2-0 win versus Crystal Palace and a draw against Everton. The Villains have struggled for a reliable goal scorer all season and Arsenal will fancy their chances with a place in Europe still on the line. Bukayo Saka has emerged as one of the brightest young talents in the country this season and has looked Arsenal’s biggest threat since the restart.

United have been rampant in recent weeks in front of goal but could be without the emerging Mason Greenwood for this fixture due to injury. Bruno Fernandes has been hailed as the catalyst in United’s uptick in form since his arrival in January and has looked to be forming a dangerous partnership with Paul Pogba. His prowess from long range makes him a threat against a West Ham side that will likely sit deep.

Since being crowned champions, Liverpool have won 2 in 5 games and do not have much else to play for in the league. This’ll be a crucial game for Chelsea’s Champions League hopes and American Christian Pulisic has been in fine form for the Blues since the restart and will be a huge threat to punish the reds on the counter attack. 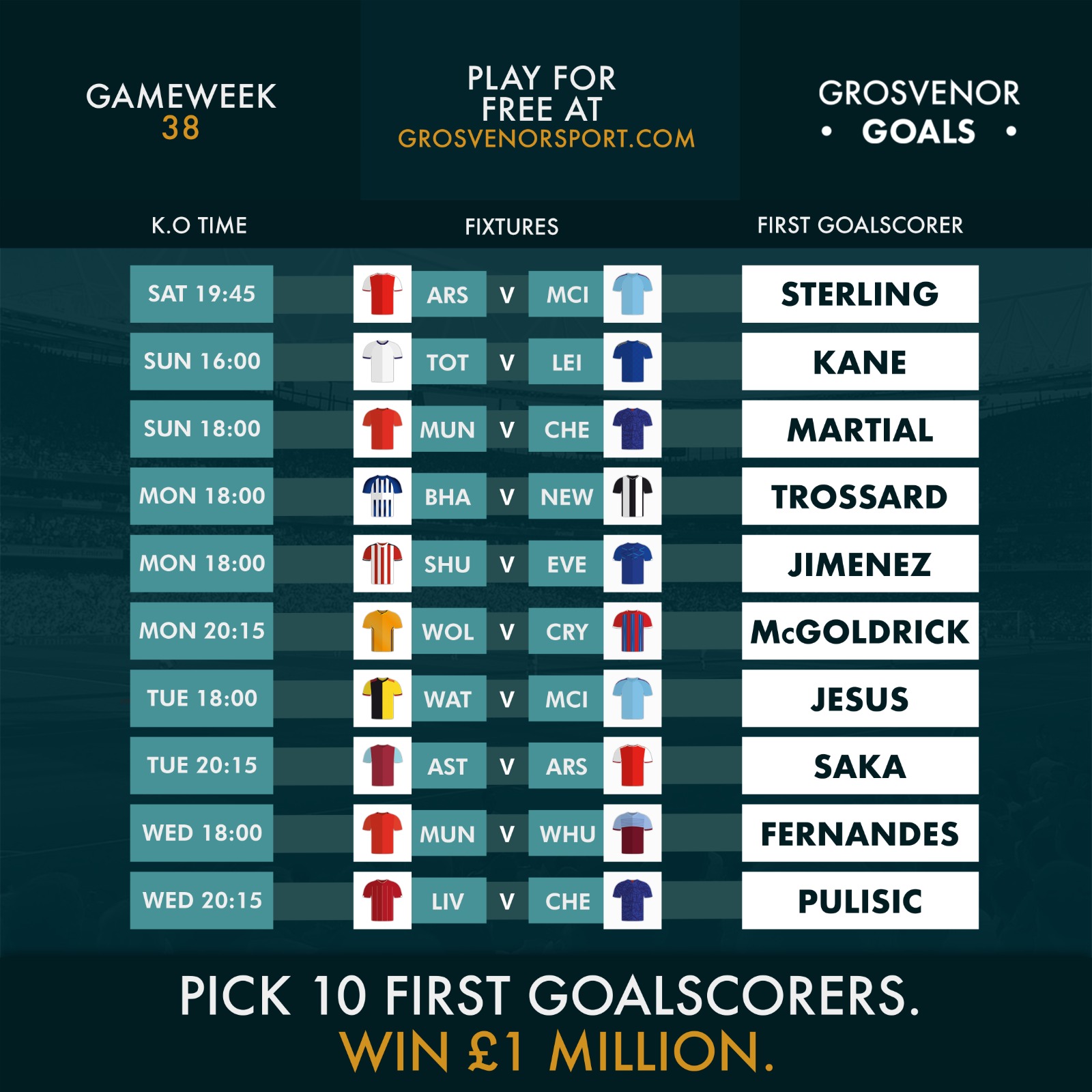 There’s a GUARANTEED £5,000 to be won on this week’s games for the player who picks the most first goalscorers in the selected games, and a £1M jackpot if you get all 10 correct, so make sure you get your entries in. It’s free to play and the deadline for entries is 7:40PM SATURDAY JULY 18th.