As this unique season comes to a close, one game remains in the English football calendar for the 2019/20 season – the FA Cup final.

Arsenal will be playing in the FA Cup final for a record 21st time after they beat Manchester City to earn their Wembley appearance, and the record winners of the competition will take on Chelsea, who saw off Manchester United in order to book their place in the final for a 14th time.

This will be the third time that these two London rivals have met in the FA Cup final. The first came at the end of the 2001/02 season where goals from Ray Parlour and Freddie Ljungberg gave the Gunners a 2-0 win. They also squared off in 2016/17 when it was again Arsenal who prevailed courtesy of goals from Alexis Sanchez and Aaron Ramsey in a 2-1 win. Chelsea will be hoping it’s third time lucky this weekend.

Ahead of the game, we have put together a combined XI of the two sides who finished eighth and fourth respectively in the Premier League this season.

At the start of the season now nearly a year ago, you would have been forgiven for not knowing who Emi Martinez was. The 27-year-old has spent a decade at the Emirates and made just 14 first team appearances for the Gunners and has six loan spells away from the club. However, an injury to Bernd Leno has thrust Martinez into the side post-Lockdown and has impressed, keeping five clean sheets in 10 starts.

The veteran defender has been a near ever-present for Chelsea this season, starting 36 Premier League games, scoring twice and providing six assists as the Blues finished in the top four. Azpilicueta’s consistency over the last four or five years is almost unparalleled at the position.

Chelsea defensively have struggled at times this season, but they have been a much more solid unit with Rudiger anchoring the back four. After spending the first half of the season injured, Rudiger has started all but three Premier League games since mid-December as Chelsea cemented their place in the top four.

While much is always made of some of the errors in Luiz’s game, namely becoming the first player to concede five penalties in a single Premier League season, when he’s on form, there aren’t many better than him, and he showed that with his resolute and determined display in the semi-final win over Manchester City.

Kieran Tierney may be considered one of the bargains of the season after his debut campaign in English football. The Scotsman cost just £25m and has made the left-back spot his own at the Emirates, making a strong case for himself as the division’s next best left-back after Andy Robertson.

Perhaps the easiest pick in this entire team, N’Golo Kante’s value to the Chelsea side cannot be quantified – they are a vastly different team when he’s anchoring the midfield. The Frenchman is still regarded as one of the best holding midfielders in world football.

Kovacic made his loan move from Real Madrid permanent last summer and has enjoyed a strong season at the heart of the Chelsea midfield. While he’s only managed to net just the once in the Premier League, Kovacic has been instrumental in the build up for many more.

While he might not have hit the heights many would expect of a £72m winger, Pepe showed signs under Arteta, especially post-Lockdown, that he could be worth that sum. Having only just turned 25, Pepe registered eight goals and nine assists for the Gunners this season.

Another who has a hefty price-tag on his name, Pulisic started the season slow but ended with a bang, netting 10 goals and providing 10 assists in his first season at Stamford Bridge across all competitions. After Lockdown, Pulisic scored four goals and laid on another four assists in nine Premier League games as Chelsea pipped Leicester to a Champions League place.

Since he signed for Arsenal, no player has more Premier League goals than Pierre-Emerick Aubameyang who notched 22 in the league in 2019/20, one behind Golden Boot winner Jamie Vardy and seven greater than Chelsea’s top marksman in the Premier League – Tammy Abraham. 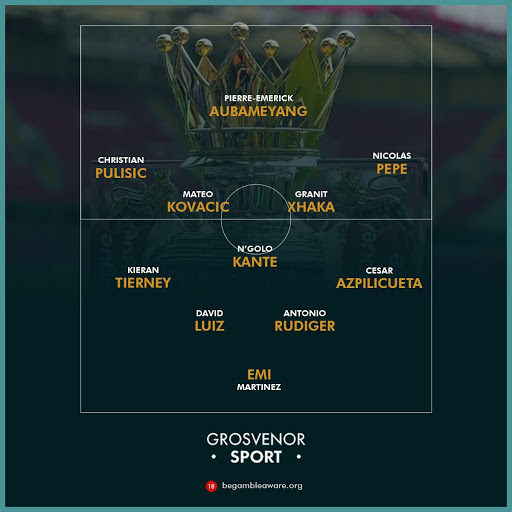 Here’s a look at our team in full. What do you make of it? Were there any players you feel we missed out, and who do you think will win the FA Cup final this weekend? Let us know in the comments below!