The English Football League pyramid is one, if not the most-watched sport across the globe.

The series of interconnected leagues are run in a hierarchical system with promotion and relegation in place across every division. This promotion/relegation aspect is exactly the element that entertains the most.

With the performance on a constant improvement, it surely gives every side the incentive that one day they could potentially play in England’s top league – the Premier League.

Throughout this guide, we take an in-depth look at the system, the English cup competitions, and how the pyramid works. 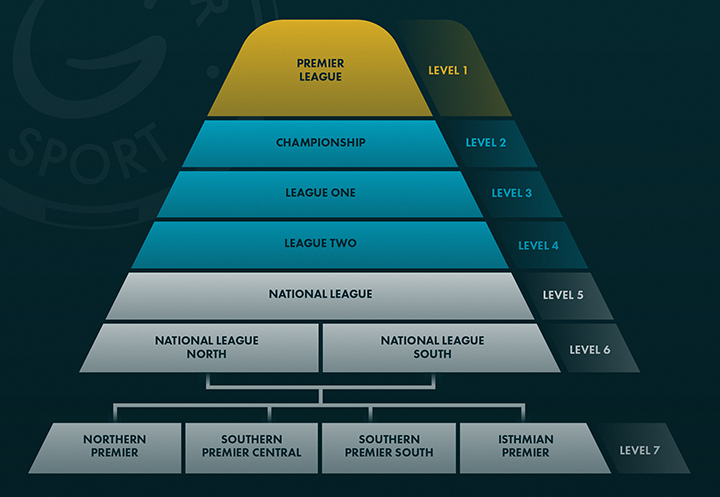 The team that finishes top at the end of the season is crowned the Premier League champions, while the bottom three teams are relegated.

Did you know that you can bet on the action from the Premier Leagues at Grosvenor Casinos? Our Premier League betting page provides real-time betting options on your favourite teams for the league.

The top two teams win promotion automatically, with the next four highest teams competing in play-offs with the winner gaining the third promotion spot. The final playoff match which decides who picks up the third promotion place is known as the richest fame in football. This is because of the extra money gained from playing in England’s top league. The bottom three teams are relegated. See the next match happening on our Football Betting page.

The top two teams win promotion automatically, with the next four highest teams competing in play-offs with the winner gaining the third promotion spot. The bottom four teams are relegated.

The top three teams win promotion automatically, with the next four highest teams competing in the playoffs with the winner gaining the fourth promotion spot. The bottom two teams are relegated.

The champions are promoted with the next six teams competing in the playoffs with the winner gaining the second promotion spot. The bottom four are relegated to either North or South division as appropriate.

The champions are promoted with the next six teams competing in the playoffs with the winner gaining the second promotion spot. The bottom three are relegated to either Northern, Southern, or Isthmian Premier Division depending on their location.

We may have covered the top 160 teams in the English Football League pyramid, but there are still plenty more teams in the pyramid.

Currently, there are 22 teams in each of those leagues with the champions automatically promoted, while the next four teams in each division compete in the play-offs. Those four winners are then paired off geographically for a further match to determine which two teams are promoted, teams. The bottom three teams from each division are relegated to an appropriate level, eight divisions.

Step eight follows a similar principle with seven leagues, where again the champions are promoted automatically and the next four teams in each division compete in the playoffs, with the five best play-off winners by points per game being promoted. The bottom two teams are relegated to a level nine division.

The major one is the FA Cup, where every team from Level 1-10 is eligible and it is this competition that gets the most exposure of any, with the potential for non-league sides (Level 5 to 10) to cause upset against the league sides (Levels 1 to 4). Take a look at our giantkillings blog here.

The EFL Cup is solely for the top-92 sides (Levels 1 to 4) to compete in, while the EFL Trophy is for teams from Levels 3 and 4, though it also includes several Academy sides from teams in Levels 1 and 2 to enable youngsters at those clubs to get senior game experience.

Want to learn how to bet on all the football in the English Football League Pyramid? Our handy blog explains all you need to know.

Finding your football betting skills as reliable as Man Utd since Fergie left? Why not take a break and check out what else you can bet on at Grosvenor Casinos at our sports betting site.