Best golfers of all time

Golf is one of the most popular sports around, and a number of great players have graced the game over the years.

Only a select few have gone on to win all four major championships – The Masters, The Open Championship, The US PGA Championship and the US Open.

Over the years there have been many advances in the sport, including technology, equipment and the design of golf courses to name just a few.

Irrespective of the differences in the modern game compared to the sport which was first played back in the 15th century in Scotland, golfers still have to have that natural ability to make it all the way to the top.

Jack Nicklaus, Nick Faldo, Tiger Woods and Gary Player are just some of the greats to have made a name for themselves in the sport, as well as have a massive impact on the game.

In this blog  our golf betting expert takes a look at some of the greatest male and female golfers from around the world. 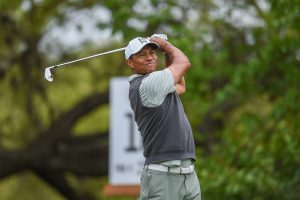 Undoubtedly one of, if not the greatest modern day golfer, who has made a strong return to the sport after a number of years of struggle through injury.

He took the 1997 Masters by storm, winning by 12 strokes and became world number one in the same year, less than a year after turning pro.

By the age of 24 he had completed the Grand Slam, becoming the youngest to do so and he has now achieved three Grand Slams.

To top things off, Woods sat as the number one ranked golfer for a total of 545 weeks in two separate spells.

Has recently returned to the form that made him such a dominant force and Woods will be keen to add to that tally even further.

The only major which alludes the Northern Irishman is the Masters, and he has bad memories of the event back in 2011 when he let a four-shot lead.

Since then he’s gone on to finish fifth but is still one of the best current players, and won his first major back in 2011 when taking the US Open in 2011.

He has since followed that up with PGA Championship titles in 2012 and 2014, with the latter being his most successful year to date, having also scooped The Open in that year.

Was world number one golfer for 95 weeks, and has also helped the European Ryder Cup team to five wins over the United States. 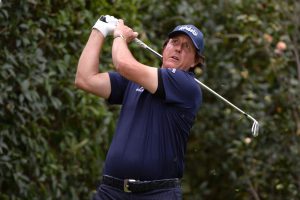 ‘Lefty’ is one of the more popular players on the tour and has five major championship wins, including three Masters which he won in 2004, 2006 and 2010.

On six occasions he has finished as runner-up in the US Open, the one major which still currently alludes him.

Success didn’t come straight away for the left hander and after turning professional in 1992 it took him until 2004 to win his first major championship – the 2004 Masters.

Ernie Els may have only won two major championships, but ‘The Big Easy’ is considered one of the best golfers around.

His first major win came back in 1994, but the consistent South African has remained at the top of the game for a long time, with his last major win coming 18 years later when winning his second Open Championship.

Els’ major wins saw him become one of just six players to twice win both championships, and until 2013 held the record for the most number of weeks inside the top-10 (788).

Nicknamed the Golden Bear, many believe him to be the greatest golfer of all time and won a staggering 18 major championships in a spell of 25 years.

Nicklaus is one of a select few to complete the Grand Slam of majors, winning the Masters six times, the US Open four times, The Open three times and the PGA Championships five times.

Before Tiger Woods, he was the youngest to complete the Grand Slam back in 1966 aged 26.

When securing his 18th and final major win – the 1986 Masters – he became the oldest winner of the tournament at the age of 46.

Winner of nine major championships, Player is undoubtedly the greatest South African golfer of all time.

He’s one of just five to complete the Grand Slam with three Masters and Open Championships titles to his names, as well as two PGA Championships and one US Open.

His US Open win back in 1965 saw him become the first non-American golfer to achieve that feat and he was duly inducted into the World Golf Hall of Fame in 1974.

The evergreen Watson maybe 69, but just 10 years ago he was within a putt of winning a sixth Open title, only to lose in a play-off to Stewart Cink and he would have become the oldest winner of a major championship had he done so.

Picked up 70 career wins, and taking into account Jack Nicklaus was his major rival, that makes his achievements all the more spectacular.

His eight major wins put him in sixth spot in the list of total major championships in behind Nicklaus, Woods, Walter Hagan and Ben Hogan. 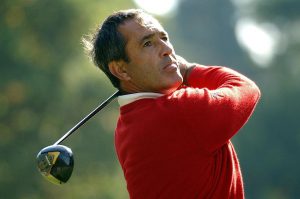 The late great Seve Ballsteros will go down as one of the most iconic golfers ever. The enigmatic Spaniard captured the hearts of many golf fans with his eccentricities making a popular figure.

Ballesteros won The Open Championship on three occasions, as well as the Masters on two occasions.

He could never quite replicate those feats in the US Open or PGA Championships with third and fifth place finishes respectively.

The Spaniard was one of the sport’s leading figures for over two decades and won over 90 tournaments in his career, while he also inspired a number of Ryder Cup wins for the European team

Undoubtedly the greatest British golfer to have graced the game to date, Faldo was number one in the world rankings for a total of 97 weeks.

His six major wins came in just two tournaments – the Masters and the Open Championship – though he came so close to completing the grand slam, with second-placed finishes in both the US Open and the PGA Championships.

His first Masters success in 1989 saw him pick up the BBC Sports Personality of the Year award and was later awarded an MBE for his services to golf in 1998, two years after winning his third and final Masters.

Since putting the clubs away, he has become a very successful commentator in the sport with regular appearances at the major events across the world. 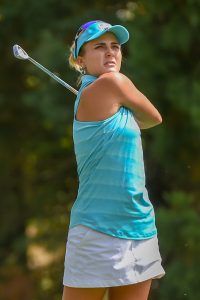 Lexi Thompson currently sits in the top-10 of the world rankings, and at the age of 24, is sure to have a promising future in the sport.

She qualified to play in the senior US women’s open at the tender age of 12, and turned professional in June 2010.

Won her maiden title on the LPGA tour at the age of 16 years, seven months and eight days in 2011 and picked up her first major win in 2014.

While that remains her only major win, she has finished in the top-10 of all the majors and looks almost certain to build her early success.

A pioneer of the women’s game, Pak is credited with changing the face of golf.

When she joined the LPGA in 1998 — a year in which she won two majors — Pak was the only Korean player on Tour.

Ten years later, there were 45 Koreans on the LPGA. In June 2007, at age 29, she qualified for the World Golf Hall of Fame, surpassing Karrie Webb as the youngest living entrant ever. 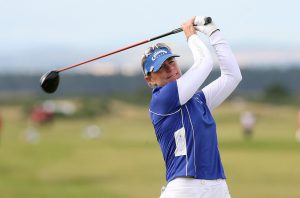 The winner of a record eight Player of the Year awards, Annika Sorenstam is the only female golfer to shoot a 59 in competition.

After winning eight times on the LPGA Tour in 2001, Sorenstam followed it up with an incredible 11 wins in 2003.

She made history in that year, as she lined up alongside the men in the PGA Tour’s Colonial Tournament, making her the first woman to play in a Tour event since 1945.

Wright’s 82 LPGA victories are the second-most in LPGA history. Wright began her amazing LPGA career in 1955.

The great Ben Hogan was full of praise for Wright’s swing, commenting  that it was the best he’d ever seen. In an eight-year period between 1958-1966, Wright won all 13 of her major championship titles and that places her in second spot in all-time career wins behind Patty Berg’s record of 15.

Before her golf career began in earnest, Zaharias won two gold medals in track and field at the 1932 Olympics.

Zaharias had her greatest year in 1950 when she completed the Grand Slam of the three women’s majors of her day: the U.S. Open, the Titleholders Championship, and the Women’s Western Open.

Also that year, she reached 10 wins faster than any other LPGA golfer, doing so in one year and 20 days, a record that still stands to this very day.

Favourite Golfers in The Masters 2019

The greatest golf tournament of the year is nearly upon us – The Masters.

For four days from Thursday 11th April, the greatest golfers in the world head to Augusta National, one of the most famous courses in the world, looking to win the 83rd edition of the event.

Augusta National is located in the state of Georgia and has hosted the Masters since 1934.

The 11th, 12th and 13th holes are commonly known as Amen Corner, where some of the most exciting golf takes place throughout the tournament, and every single hole on the course is also named after flowers.

This year the Masters will be contested by 87 golfers, its smallest number of participants ever and golfers have to fulfil one of the following criteria 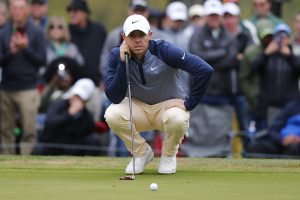 Woods is back with a bang and the winner of 4 Masters is another returning to the form which saw him dominate the sport for a number of years.

Not in the best form of his career, but Jordan Spieth has the potential to light it up around Augusta, as he did in 2015

Rose continues to be a the top of his game, and is another who is yet to win the event, despite being in the top-10 of the world rankings for a considerable amount of time

Big hitter DJ can never be ruled out of contention, despite not doing so well at the event in the past.

Fancy a bet on the 2019 Masters? Take a look at our latest market ahead of the start on Thursday.