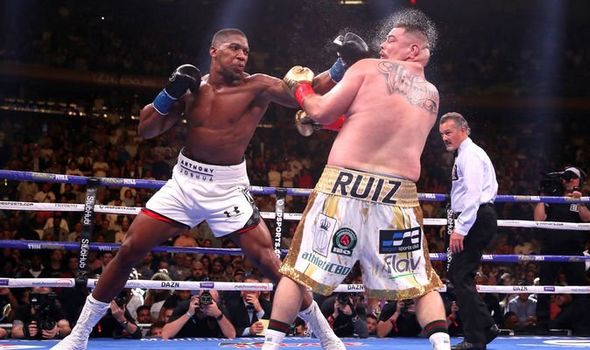 Anthony Joshua will fight Andy Ruiz Jr. in Saudi Arabia this weekend in a heavyweight title rematch that promises to be one of the fights of the year, and our boxing expert expects the Briton to win and become a two-time world champion, priced at 4/9 with Grosvenorsport.com, but you can get it at 8/9 with our Double the Odds offer.

Read on for our full betting preview of the fight. You can also visit our website to view all of our available boxing betting odds.

A moment in history

The ‘Rumble in the Jungle’, the ‘Thriller in Manila’, the ‘Clash on the Dunes’ – this fight has all the attributes to stand above the rest in the history books of boxing, to be remembered among the great fights of our time.

Besides the fact that it’ll be the first heavyweight world title fight in the Saudi Arabian desert, that there has been an arena built specifically for the occasion, that the fight purse figures have been reported as two of the largest in history, it’s a bout that will define the careers of both men in the ring.

If you were to look at this fight in its own right, dismissing the outcome and events that took place on June 1, you’d have to say that Anthony Joshua, by stature and size, should be all wrong for the Mexican Ruiz Jr.

Joshua boasts a four-inch height advantage and an eight-inch reach advantage over Ruiz, a substantial distance that he failed to use to his benefit in the first bout.

If Joshua is to become a two-time world champion, his best chance of doing so is to keep Ruiz at range with his jab, tire him out by making swing and miss on the inside, and take him out in the later rounds.

We like the look of a Joshua KO in rounds 10-12, who won’t be in a rush to get Ruiz out at any stage, which you can get a 15/2. For AJ, it’s all about the win on the night, and reclaiming what he believes to be his, by any means necessary.

If he fails to do so, it could be a long night again for AJ, with Ruiz more than happy to stand and trade, and you can get the champion to take him out again at 7/4.

If you fancy Ruiz Jr. to get the win over Joshua again, it’s unlikely that he would do so over 12 rounds to get the win by decision, as this is the type of fight that Joshua will likely win, due to his superior height and reach.

How do betting odds work?